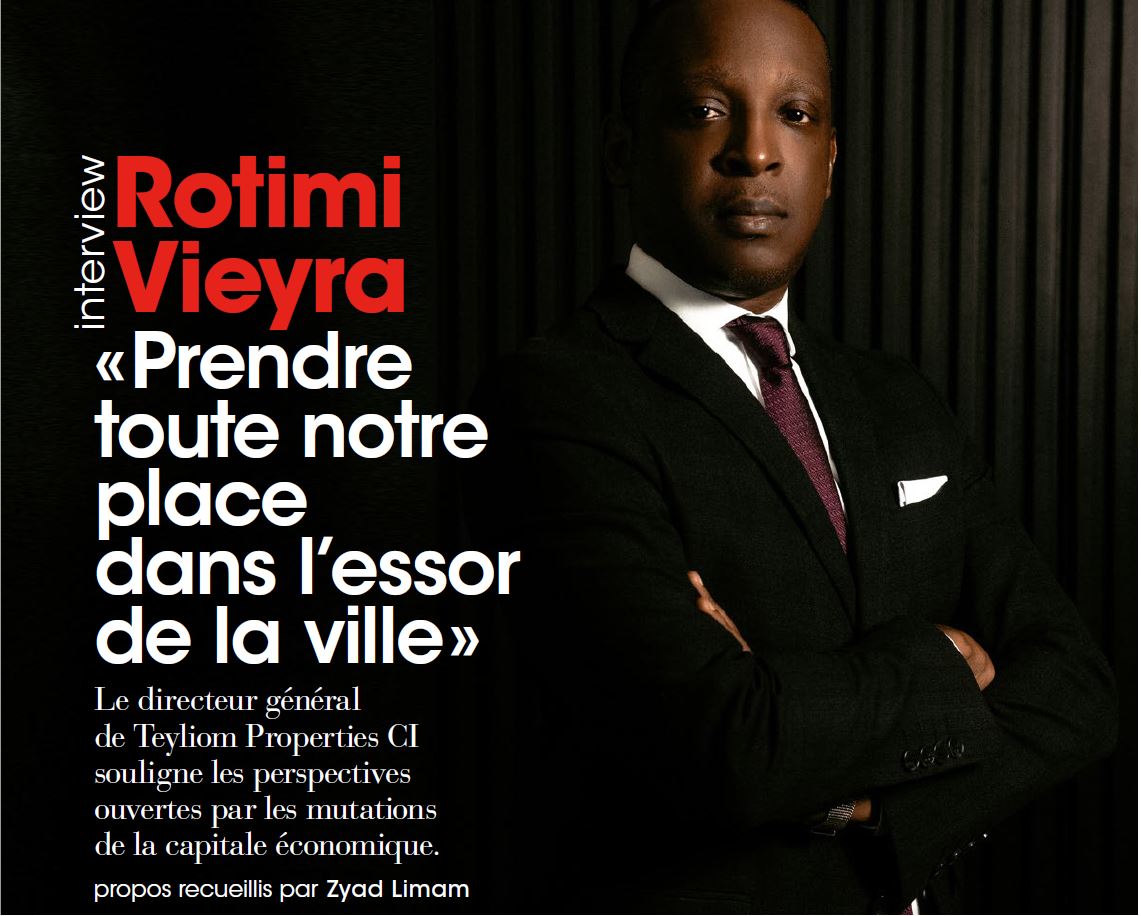 The Teyliom group, founded and directed by Yérim Sow, seems to be refocusing its activities on Côte d’Ivoire and Abidjan. What are the reasons for this approach?
Rotimi Vieyra: Côte d’Ivoire has always been at the heart of Teyliom’s strategy. Telecel, launched in 1996, has become the second largest mobile operator in the country. According to the group’s consolidated data at the end of December 2021, the country represents 60% of revenues and 38% of human capital, with subsidiaries
such as Bridge Bank Group Côte d’Ivoire, Continental Beverage Company (CBC), which markets Olgane mineral water, hotels (Seen Hotel Abidjan and Noom Hotel Abidjan), and several large-scale real estate projects. Finally, with a growth rate of nearly 6%, political stability, and long-term prospects, Côte d’Ivoire represents a land of opportunity for an ambitious group like ours.
The new Ivory Coast favors the establishment of companies and individuals in an ultramodern environment. ABP will propose a complete, contemporary real estate offer, with a subtle arrangement of residential, commercial, leisure, business, office and hotel spaces on nearly 40 hectares along the Airport Boulevard, between the Akwaba traffic circle and the exhibition center under construction. With the development of this zone, supported by the State, the future of Abidjan is being born, and we are proud to contribute to it!

How would you define the real estate market in Abidjan?
It is characterized by undeniable dynamism, with an annual growth rate of nearly 20% since 2012. It is also marked by a twofold deficit: quantitative, due to an ever-increasing demand (between 40,000 and 60,000 housing units per year), in connection with demographic pressure, and qualitative, with the need to improve the overall level of construction and services.

It remains a very attractive investment, especially in the Plateau. Generally speaking, demand is strong and prices continue to rise. Between 2020 and 2022, rents for modern office buildings continued to rise, from an average of 12,000-15,000 CFA francs per square meter per month to 18,000 CFA francs or even 23,000 CFA francs per month.
CFA francs to 18,000 CFA francs or even 23,000 CFA francs. This phenomenon is partly explained by the willingness of landlords to locate in “prestige” neighborhoods that reflect their status.
However, here too, the medium-term evolution must be monitored, with an increase in supply linked to the delivery of new office buildings in other tertiary zones of the city, notably the Deux Plateaux, Biétry and Zone 4. Eco-responsible construction, water management, rainwater, sewage and drains are recurring themes…

What is your analysis of the environmental challenges facing the city?

The construction industry is one of the fastest growing in the world. This dynamism brings with it many ecological and environmental problems, as well as health issues, such as waste management and the installation of efficient sewage and drainage systems. We must also face the effects of climate and rainfall changes. Many cities across the emerging world are facing these challenges, plus of course the need to constantly invest in infrastructure to “get up to speed”. At Groupe Teyliom, we are particularly sensitive to these issues and believe that these aspects must be integrated into the design of construction programs. This is why our projects are engaged in the EDGE certification process of the International Finance Corporation (IFC), with the aim of reducing water and energy consumption as well as the energy footprint of construction materials, energy footprint of construction materials. Urban congestion and traffic jams appear to be key issues. The government is investing heavily in infrastructure.

Many stakeholders are looking for real estate investments to match their ambitions.

How to make the megalopolis “more fluid”?
The city of Abidjan is estimated to have around 17 million trips per day, of which 9.5 million are by motorized vehicle. This urban congestion is obviously “annoying”, but above all it creates serious health and environmental problems due to high carbon dioxide emissions. The numerous investments made by the government in infrastructure should eventually reduce the phenomenon, in particular with the long-awaited Y4, the bypass road that will make the belt of Greater Abidjan, starting from Bassam to Bingerville, to join Cocody, Abobo, Anyama, Songon, then ending at the Jacqueville crossroads, and finally following the sea shore to the port of Abidjan. Other solutions are also possible, namely investment in mass public transport and the relocation of some public and private services.

Are you in favor of the concept of new cities like Diamniadio, in Dakar (where you invested)? Is it applicable to Abidjan?

Absolutely! In Diamniadio, Teyliom is actively involved in the development of the new urban pole, with the delivery of the ministerial spheres in 2019 and the construction of 904 housing units.
These new cities represent opportunities for players in the real estate sector. But they also make it possible to respond to the problems of urban congestion. The concept is perfectly applicable in Côte d’Ivoire and Abidjan. Our Akwaba Business Park project is part of this dynamic.

What is the problem of land tenure? Have we made progress in terms of legal security? And availability?

The expansion of Abidjan and the major cities in the interior of the country has led to an increase in land disputes. The government has therefore undertaken energetic reforms to clean up the urban land, urban planning and housing sector. These include the creation of a one-stop construction shop and the securing and facilitation of procedures for obtaining land titles (the Arrêté de concession définitive, ACD). More recently, the government has adopted a regulation in connection with the
More recently, the government has adopted a regulation related to the Integrated Urban Land Management System (SIGFU) as well as a decree on the implementation of the project to delimit the territories of the villages of Greater Abidjan. There is therefore a real political will to make progress. In terms of availability, it is also necessary to “think” outside Abidjan. The supply of
The supply of land remains high, particularly with the new attractiveness of cities such as Grand-Bassam, Bingerville, Bonoua, San Pedro, Yamoussoukro and Bouaké.

Read the rest of the article on Afrique magazine: https://afriquemagazine.com/hors-serie-abidjan

Leave your email and we will keep you updated

Thank you for
your request

We know what to offer you

thank you for
your request